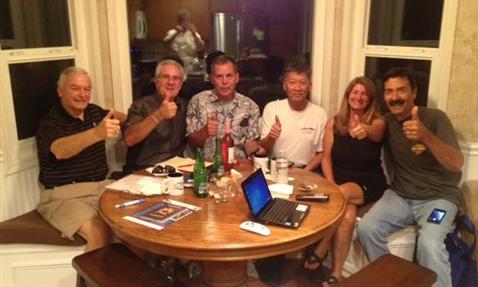 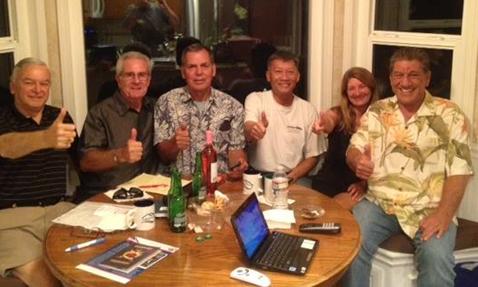 Aloha All....... today we have lost one of our own, Richard Carroll and the sadness is truly overwhelming. I want all of you to know this "Giant" of a man who was beloved by all and will be so missed as he was family! Richard had been a member of our VVA Chapter 785 for the past decade and a half and did his service in Vietnam with Hotel Company of the 2nd Battalion, 75th Ranger Regiment. He was a LRRP and was caught up in the melee at Bu Prang along the Cambodian Border with the 5th Special Forces Group when they were almost overrun by the NVA in 1969. He had previously written his Mother how he was a cashier at the local Army PX so that she would not worry until she read a story with his name on the battle at Bu Prang. The story had noted how he had carried his wounded squad leader under fire to an extraction point for a waiting dust-off and like his Father before him, he served courageously and honorably being awarded a Bronze Star with Combat V for heroism just like his Dad before him.

Richard's Father was a MSgt who served with the 101st Airborne making the jump into Normandy before D-Day and was awarded a Bronze Star with Combat "V." His Dad was transferred to the South Pacific after the war ended in Europe and was wounded in the Battle for the Philippines. His Dad suffered massive chest wounds that included losing a lung that deteriorated his quality of life over the years before he stood his last formation at the young age of 54.      Richard could have been one of your favorite "rock stars." He started a "garage band" in High School that led to a short but successful music career playing at such historic spots in Los Angeles, like the Whiskey A Go-G0, the Golden Bear, the Sugar Shack and even the Hollywood Bowl. Capital Records was going to sign them when Richard opted instead to serve his Country and departed for Vietnam. When he returned he did not pick up a guitar for decades, not until his 40th High School reunion where his old group got back together for two songs and they ended up singing for two 45 minute sets. Richard married his High School sweetheart Carol and they have been together for 48 years. Both Richard and his beautiful bride Carol enjoyed the moto-cross circuit and rode many a dirt bike together in the desert and on the tracks.     Richard was a supporter and volunteer for Snowball Express the three years that it was in California. He made many friends with the widows and children of our fallen as he was easy going and soft spoken and truly understood their loss. Though he struggled daily, Richard like the true Ranger that he was, seldom complained and continued to give back to our Veterans and their families in need. Though soft spoken, Richard did have a great sense of humor always enjoying the banter and barracks humor.     Many Chapter 785 Members, Pete, Bruce, Jerry, Chuck and Nancy, to name just a few, visited Richard throughout the day and I said my goodbye last night as I stood in front of him and said "Brave Rifles" with a wave of my arm..........Richard responded with a hand salute and simply said "Veteran" and "Airborne" as was the custom. Richard had at one time served with the 3rd Calvary Regiment and had told me of their proud traditions since the Indian Wars. After a long skirmish with soldiers the Indians withdrew and the Chief stood on a hill looking down at the soldiers who had fought so valiantly and called out with a sweep of his arm, "Brave Rifles" as a sign of respect for their courage in battle. This is the story that Richard loved. Our "Brother" and Richard's closest friend, Binh Pham, was with him today and held his hand which Richard squeezed, Binh then said a prayer and Richard passed peacefully. Binh did mention that the hospice nurse that came to the house was a former Ranger and he and Richard immediately bonded. An act of kindness from God I'm sure.     I am at peace knowing that Richard no longer suffers and is now cradled in the Lord's arms. I am at the same time angry that we still continue to suffer casualties from the Vietnam War that ended 38 years ago. I am angry with an uncaring government and a VA system that is broken and continues to fail with taking care of our own, our nations most treasured, it's Veterans. I am angry that our Veterans are continually denied medical care and benefits for Agent Orange and all the other chemicals that poisoned their bodies and now has become known as the Agent Orange Legacy. I am angry that for decades the government denied even it's existence. Our WW2 and Korean War Veterans live well into their late 80's and 90's while we continue to lose our Vietnam Veterans by the thousands in their late 50's and 60's. I am angry because I will miss Richard and I am angry for all the other friends and "brothers" that we have buried over the years. God Bless you Richard, we love you and you will be missed and the tears cannot be contained. God Bless your beautiful bride Carol and your family for their loss. "Fair winds and following sea's" on your journey to Valhalla Richard.........we all will someday join you on the high ground. Oooorah and Semper Fi Ranger......and "Rangers Lead the Way." the Gunny (Monsoon)